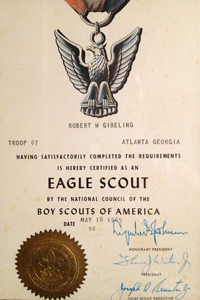 Growing up in Atlanta has given Bob a “can do” spirit and deep loyalties. His Dad, Robert Gibeling, Sr., was an architect who designed churches and commercial buildings in Atlanta while guiding Bob to develop the solid values found in the Boy Scouts. “My Dad encouraged me so strongly that I eventually earned my Eagle Scout award with Troop 67 in Atlanta, “remembers Bob. In addition, Bob earned his Pro Deo et Patria Award for Lutheran Boy Scouts, which required many hours of community service.

Attending public schools in Atlanta has made Bob a strong advocate for public education. While at Grady High School in Atlanta, he played a small part in the process of desegregation. Bob was selected as one of the students who helped orient the new students and  adjust to their new surroundings. “I was so proud that Grady was calm and respectful of our new African- American classmates, while keeping the school’s high academic standards,” recalls Bob.

Later on while at Grady, Bob attended the Governor’s Honor Program in Social Science. ” I still remember the teacher that Summer had us choose where we were on the political spectrum, from conservative to liberal, in order to get a range of views on topics we debated. Even at that early age I chose the Centrist Position, which I still hold today,” states Bob. 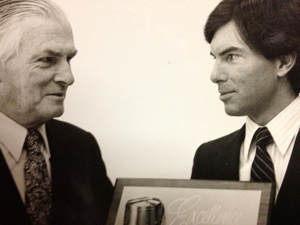 Bob earned his Bachelor of Science Degree in Management from Georgia Tech, where he became a member of Sigma Phi Epsilon Fraternity and Alpha Kappa Psi Business Fraternity. His interest in politics surfaced as Political Editor of the Technique, the student newspaper. While serving as Political Editor , he interviewed and wrote articles on such notable people as Sam Nunn and Andrew Young, early in their careers. He also started a series of articles about outstanding women attending Georgia Tech, because he felt they were being disrespected by the overwhelmingly male student body. After graduating from Tech, he worked for 3 years at Rich’s Department Store and Georgia Federal Savings and Loan, saving his money to attend graduate school at the University of Tennessee, where he earned his MBA in Marketing. 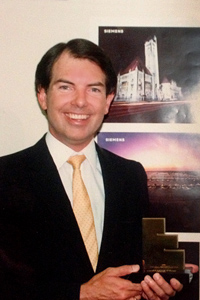 After receiving his MBA, Bob worked for Sawyer Advertising, where he became the most profitable account executive in the company. The next move was a big one, Advertising Manager for Georgia- Pacific Corporation, where he received an award for his Building Products catalog. Bob then moved to the Atlanta based cable TV network, The Weather Channel, where he became the first Advertising Director of this start up company, which has proven to be a tremendous success. Several programs  on The Weather Channel still use the original names he created.

Bob later became the Advertising Manager for Siemens Energy & Automation, now based in Alpharetta. During his 5 years on the corporate staff, the marketing campaign he supervised won a National Effie Award for Advertising Effectiveness from the American Marketing Association. 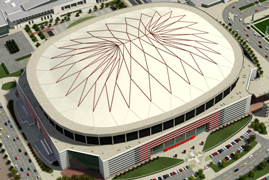 Next Bob started his own marketing consulting company, which led him to write and produce the video presentation that helped win the contract to design and build the Georgia Dome for a team of Georgia architectural and engineering firms. In total, Bob worked in both large corporate management and small business marketing with marked success for 19 years.

In the next phase of his career,  Bob worked in faith based non profit organizations in order to help those in need.  He was the first full time employee of Lutherans Concerned/North America, an international organization, where he set up a full range of support functions, created an endowment fund and established formal relations with the Evangelical Lutheran Church in America. He completed 10 years of service there, speaking to faith communities across North America to make the Lutheran Church fully inclusive in the United States and Canada. Next he served on the staff of  the Atlanta Interfaith AIDS Network where he helped organize a Congressional Prayer Breakfast in Washington, DC and secured several major grants which provided key funding to this ministry. While serving as Coordinator of Volunteers for Lutheran Services of Georgia, Bob dramatically increased the level of volunteer support for this statewide agency. He also  established a relationship with For The Kid in All of Us, a local Atlanta charity that provided over $50,000 of contributions to help needy children served by Lutheran Services of Georgia.

As a lifelong Lutheran, Bob’s faith is very important to him. He has sung in church choirs since he was a child. Bob is frequently a communion assistant and lector, reading scripture lessons during worship. He has been elected to four terms on the governing Council of Redeemer Lutheran Church in Atlanta,  the largest Lutheran Congregation in the South. In 2003 he was elected Vice President of the Congregation. Bob also is an associate member of St. Luke Lutheran Church in Buckhead.

He has written several highly significant policy resolutions at the local and national church levels, which have passed because he worked with people of very diverse viewpoints. Notable among these  policy statements is a national endorsement of the Employment Non Discrimination Act, still being considered by the US Congress, Advocacy for AIDS Education and Anti Bullying legislation, Pastoral Care for Youth and a local Lutheran endorsement of State Employment Non Discrimination legislation covering sexual orientation and gender identity. “People sometimes ask about my legislative experience. I have been very successful in writing and getting legislation passed at assemblies of  the Lutheran Church for 16 years,” concludes Bob, “which is far more political than you might think. ” 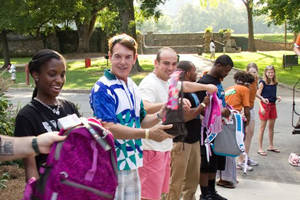 For twenty years Bob has organized his neighborhood Christmas Caroling Party in Buckhead. Not only do the singers he recruits go door to door, spreading holiday musical cheer, but they perform a program of carols at a senior’s housing community each year. While working for Lutheran Services of Georgia, Bob organized two neighborhood clean up events and helped create several food drives on MLK Day to help feed refugee families. He has served as a volunteer for a wide range of organizations including Habitat for Humanity, the March of Dimes and the Final Four Basketball Tournament in March of 2013. Bob was instrumental in establishing the Lutheran Volunteer Corps in Atlanta in 2009.

A Passion for Service to Seniors 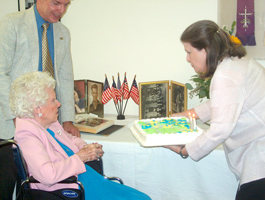 When Bob’s parents began to face some significant health challenges in 2005, Bob stepped up to begin making sure they were well cared for. He had already created special celebrations for their 40th, 50th and 60th wedding anniversaries, but this required a level of involvement that was all inclusive. After consulting with their doctors, pastors and financial advisor, Bob began to manage their housing, financial and medical needs. ” I was greatly blessed to have such loving parents. It was still a learning experience to find what was best for their needs while their physical and mental health declined, ” states Bob. Learning about insurance coverage, doctors, medicine refills, wills, trusts, housing options, care givers and taxes was almost a full time job itself.

He had to make decisions and changes that kept them safe and financially sound without getting much guidance or help, as an only child. People at their Lutheran Church and the Renaissance on Peachtree in Buckhead, where this parents moved, began to compliment Bob on the way he was caring for his parents. “I have become a passionate advocate for Seniors and have attended several seminars on care givers for family members. Our seniors are a treasure we should always appreciate, ” concludes Bob. His Dad passed away in 2009 but his Mother lives in her own condo now with constant care, under Bob’s supervision.

Georgia Family Patriotism for Over 230 Years

Bob’s ancestors from Germany settled in Georgia when it was a newly founded British colony. This Holtzendorf family is noted with a marker at Fort Frederica, the British colonial fort on St. Simon’s Island, as being some of the settlers that lived on Main Street there. One of his Holtzendorf ancestors was so active during the American Revolution in the Savannah area that the British put him on their most wanted list. Later he served in the first House of Representatives of the State of Georgia. Bob is a member of the Georgia Salzburger Society, which traces ancestors back to a group of early settlers in Georgia that came from the area around Salzburg, Austria. 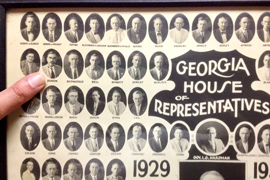 Bob’s Great Grandfather, Scott T. Beaton, served in the Georgia House of Representatives during the 1920’s and 1930’s. He was also Mayor of Waycross, Georgia where Bob’s Mother, Naomi, was raised. Bob got to talk politics with his Great Grandfather, who lived to age 92.   Bob’s Mother, Naomi Gibeling, is quite a patriot in her own right, having served as a Regent of the Atlanta Chapter, Daughters of the American Revolution. ” I remember how diligent she has been at making presentations about proper care for the American Flag at schools across metro Atlanta, ” Bob states. “She is greatly loved by the members of her women’s organizations and has passed along her great sense of patriotism to me.”